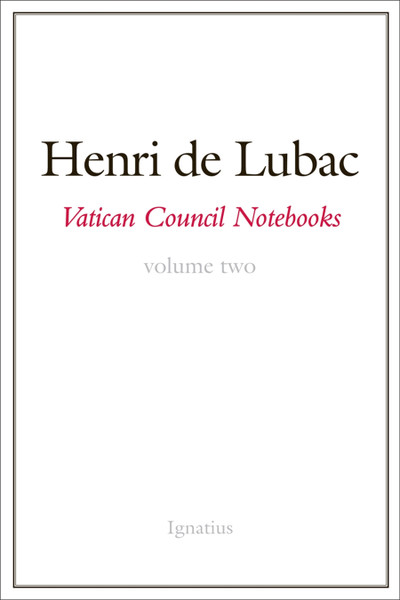 "Surprising news!" With these words, Fr. Henri de Lubac,S.J., whose orthodoxy had been so vigorously attacked, responded to the announcement of his selection to participate in the 2nd Vatican Council. His participation as a theologian and expert would make a lasting impact on the Council, and his insights and comments are recorded in these long-awaited volumes.

This is the second Volume of De Lubac's Notebooks, which trace the two years of preparation, the four conciliar sessions, and the three periods between sessions. The eminent theologian de Lubac is a sure guide for the reader, introducing us to the theological ferment of the Council and helping us to grasp what was at stake in the often animated debates.

De Lubac does not hesitate to express clearly what he thinks of the theologians around him, of the new concepts appearing because of the Council, or of the problems he judges to be most serious for the Christian faith. These Notebooks invite us to a greater historical and theological understanding of the Council.

Besides information about the numerous aspects of the conciliar assembly, what makes the testimony of these notebooks so captivating is the strongly rendered presence of men and their psychology. De Lubac excels in sketching the portrait of the participants with only a few words. Among the many interesting encounters, he tells of deepening his acquaintance with Josef Ratzinger, whom he describes as a "theologian as peaceable and kindly as he is competent". In the same way, during the long discussion over the drafting of the constitution Gaudium et Spes, he observed the assertiveness of Karol Wojtyla, whose interventions struck him because of the seriousness, the rigor, and the solidity of his faith, which created in him a lively sense of spiritual friendship, which was reciprocated.

"Fr. de Lubac has a historian's keen eye as well as a theologian's familiarity with the issues. As a participant at the Council, his notes describe what really happened in the corridors and trattoria at Vatican II."
—Fr. Joseph Fessio, S.J., Editor, Ignatius Press

"These Notebooks bear witness to the difficulties Fr. de Lubac experienced in the years following the publication of Surnaturel (Supernatural,1946), very much in evidence within the Theological Commission, in the preparatory period during which the theologian, just recently named to the commission by John XXIII, was confronted with future conciliar schemas prepared by his adversaries. Nevertheless, it was his theology that prevailed in Lumen Gentium and also in Dei Verbum."
—Jacques Prevotat, Professor of Modern History, University of Lille-III, From the Preface