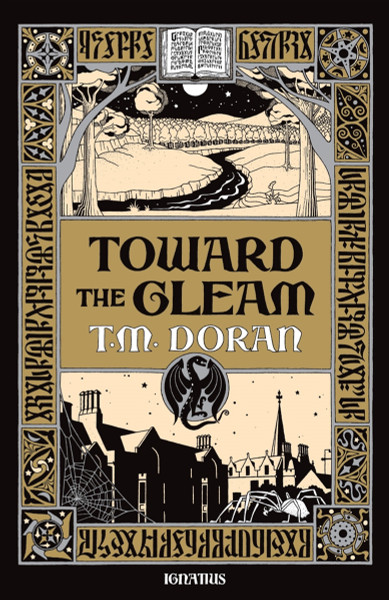 For more information about Toward the Gleam, visit the website.

Between the two world wars, on a hike in the English countryside, Professor John Hill takes refuge from a violent storm in a cave. There he nearly loses his life, but he also makes an astonishing discovery - an ancient manuscript housed in a cunningly crafted metal box. Though a philologist by profession, Hill cannot identify the language used in the manuscript and the time period in which it is was made, but he knows enough to make an educated guess - that the book and its case are the fruits of a long-lost, but advanced civilization.

The translation of the manuscript and the search for its origins become a life-long quest for Hill. As he uncovers an epic that both enchants and inspires him, he tracks down scholars from Oxford to Paris who can give him clues. Along the way, he meets several intriguing characters, including a man keenly interested in obtaining artifacts from a long-lost civilization that he believes was the creation of a superior race, and will help him fulfill his ambition to rule other men. Concluding that Hill must have found something that may help him in this quest, but knowing not what it is and where it is hidden, he has Hill, his friends at Oxford, and his family shadowed and threatened until finally he and Hill face off in a final, climatic confrontation.

A story that features a giant pirate and slaver, a human chameleon on a perilous metaphysical journey, a mysterious hermit, and creatures both deadly and beautiful, this is a novel that explores the consequences of the predominant ideas of the 20th Century.

"As this intriguing story unfolds, readers will be asked to reconsider what we thought we knew and loved so well. Flashes of recognition will occur as famous figures appear, identified only by their first names. As the plot develops, a vast landscape of drama emerges, reaching across time, probing the reasons behind the rise and fall of civilizations, our own and also another that we have considered to be myth-or fiction. The author's whimsical sense is a fine one, though he does not show his hand too early on. His wisdom is fully evident throughout. This is a dark mystery tale, a gripping adventure, and in its own unique way a comedeia, plunging us into the war in the heavens and the wars for souls. Ingeniously inventive, it is startling, moving, horrifying at times, and ultimately consoling."
- Michael D. O'Brien, Author, Father Elijah: An Apocalypse

p>"Thomas Doran's wonderful mystery novel, Toward the Gleam, takes readers on a fantastic adventure with a man who in uncovering a manuscript from a long-lost civilization, sets out on a life-long quest to uncover its meaning and origins. In the process, he is confronted by remarkable creatures, unforeseen dangers and hidden realities. This is a book richly imaginative, intriguing and metaphysical, exploring many vexing questions of the modern era and enduring truths to be discovered in the process."
-David J. Theroux, Founder and President, C.S. Lewis Society of California

"The works of Tolkien and Lewis continue to inspire new generations of writers, most of whom are not worthy to bask in the reflected glory of their mentors. T. M. Doran is a noble and notable exception. Towards the Gleam rises above the level of parody or pastiche to reach the heights that few writers have achieved. Although it basks in the reflected glory of The Lord of the Rings and conveys inklings ofThat Hideous Strength, it does not merely reflect the light that Tolkien and Lewis have shone; it refracts it in exciting new directions, toward the gleam of the glorious light that is the source of all great literature."
- Joseph Pearce, Author, Tolkien: Man and Myth