The Rights of Man and The Natural Law 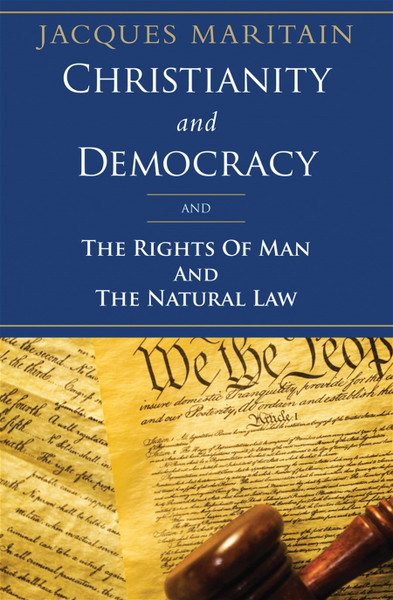 Few political philosophers have laid such stress upon the organic and dynamic characters of human rights, rooted as they are in natural law, as did the great 20th century philosopher, Jacques Maritain.

As this important work reveals, the philosophy of Maritain on natural law and human rights is complemented by and can only be properly understood in the light of his teaching on Christianity and democracy and their relationship. Maritain shows that Christi­anity cannot be made subservient to any political form or regime, that democracy is linked to Christianity, and that in order for democracy to thrive, it must reflect certain values historically derived from the Gospel.

He also argues that personalist or organic democracy provides a fuller measure of freedom and fulfillment, and that it takes shape under the inspiration of the Gospel. Even the modern democracies we have, with all their weaknesses, represent an historic gain for the person and they spring, he urges, from the very Gospel they so wantonly repudiate!

"Maritain was one of the pioneers of the Catholic human rights revolution, which changed the course of 20th century politics. While helping the Church through a genuine development of social doctrine, Maritain helped forge some of the tools that eventually broke through the Berlin Wall."
-George Weigel, Ethics and Public Policy Center

"In these passionate words one encounters the mind of Maritain in all its vigor and variety. His reflections on the challenges facing the world's democratic experiments-starkly realistic yet infused with Christian hope-are as timely today as they were seventy years ago."
-Mary Ann Glendon, Harvard University

"This has been one of my all-time favorite 'David books' - those little books that take down Goliaths. Almost single-handedly, Maritain launched an hypothesis on the Christian (and Jewish) origins of the foundational axioms of democracy, of which many atheists are now coming to admit the truth. The sheer power of his hypothesis is more evident with every passing year. The republication of this classic is therefore bound to kindle longing for a deeper, more just reevaluation."
-Michael Novak, American Enterprise Institute

"Maritain's achievement as a political thinker was to show that rightly understood, democratic liberty depends on faith, and that to lose God is to lose Man himself. Maritain's argument is needed today more than ever."
-J. Budziszewski, University of Texas

"The decision to reissue the single-volume edition of Maritain's classic works could not have come at a more urgent time, a time when, perhaps as never before, the future of democracy hangs in the balance."
- Raymond Dennehy, University of San Francisco