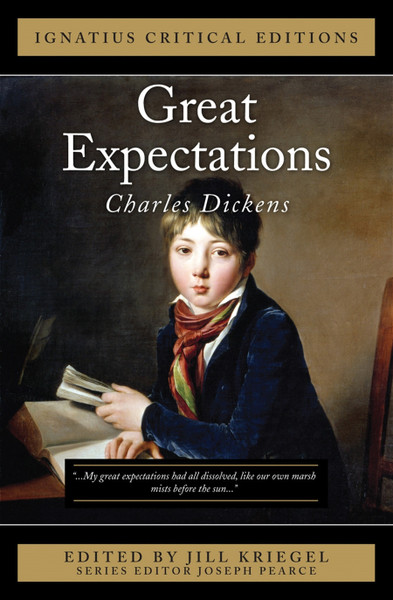 Pope John Paul I described Dickens’ books as "filled with love for the poor and a sense of social regeneration . . . warm with imagination and humanity". Such true charity permeates Dickens’ novels and ultimately drives the characters either to choose regeneration or risk disintegration. In Great Expectations, Pip—symbolic of the pilgrim convert—gains both improved fortunes and a growth in wisdom, but as he acquires the latter, he must relinquish the former—ending with a wealth of profound goodness, not of worldly goods.

That the Dickensian message was a Christian one is unmistakable. Reminiscent of an Augustinian model, one of reflection, conversion, and moral improvement, Pip undergoes an internal change that manifests itself in his profound contrition for his earlier deeds and his equally profound resolution to make amends. As we travel with Pip, we find that Dickens leads us to an acceptance of worldly limitations and an anticipation of final salvation.

The Ignatius Critical Editions represent a tradition-oriented alternative to popular textbook series such as the Norton Critical Editions or Oxford World Classics, and are designed to concentrate on traditional readings of the Classics of world literature. While many modern critical editions have succumbed to the fads of modernism and post-modernism, this series will concentrate on tradition-oriented criticism of these great works.
Edited by acclaimed literary biographer, Joseph Pearce, the Ignatius Critical Editions will ensure that traditional moral readings of the works are given prominence, instead of the feminist, or deconstructionist readings that often proliferate in other series of 'critical editions'. As such, they represent a genuine extension of consumer-choice, enabling educators, students and lovers of good literature to buy editions of classic literary works without having to 'buy into' the ideologies of secular fundamentalism.

The series is ideal for anyone wishing to understand great works of western civilization, enabling the modern reader to enjoy these classics in the company of some of the finest literature professors alive today.\