In Memory of Me

Meditations on the Roman Canon 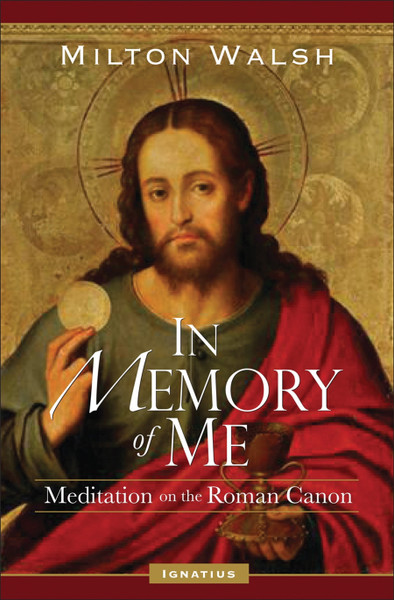 In Memory of Me

Foreword by Archbishop J. Augustine DiNoia, O.P., Secretary of the Congregation for Divine Worship and the Discipline of the Sacraments

The Roman Canon, also known as the First Eucharistic Prayer, holds a privileged place among the texts used in the Mass. With the release of a new English translation of the Latin Roman Missal, Milton Walsh's timely meditation on the Roman Canon can help priests, religious, and laity deepen their understanding of the text that for centuries was the only Eucharistic prayer used in the Roman Rite.

Drawing on the biblical and liturgical scholarship of the twentieth century, Walsh provides spiritual reflections on each of the prayers that make up the Roman Canon. This ancient prayer took shape during the golden age of the Fathers of the Church, from the fourth to the sixth centuries, and it is rich in biblical allusions and theological meaning.

In Memory of Me explores the themes of thanksgiving, offering, and intercession that recur throughout the prayer.  It explains the centrality of sacrifice in the Eucharist, not only Christ's sacrifice on the Cross and the sacrifice of the Mass, but also the offerings of the Old Testament and the self-offering of the martyrs. The trinitarian nature of the Canon, in particular the question of the role of the Holy Spirit, is also treated, as well as the relationship between earthly and heavenly worship.

In Memory of Me combines liturgical scholarship, theological reflection, and liturgical piety in a way that will deepen your understanding of the Eucharist and nourish your spiritual life."
- Most Rev. J. Augustine DiNoia, O.P., Secretary of the Congregation for Divine Worship and the Discipline of the Sacraments

"With a revised English translation of the venerable Roman Canon, many Catholics will be hearing it with new ears. This book will help them hear it with a new heart. Don't just study the new words, step into the soul of Eucharistic Prayer I."
-Rev. Paul Turner, Former president of the North American Academy of Liturgy

In Memory of Me (Digital)

You Did It to Me

He Spoke to Us

He Spoke to Us (Digital)