The Unpublished Memoirs of Edgardo Mortara 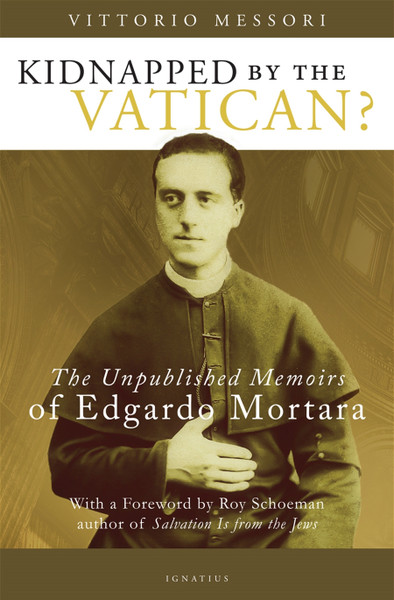 In 1888 Fr. Edgardo Mortara wrote his autobiography so that the world would understand he had not been kidnapped by the Vatican. Here, along with a thorough introduction by Vittorio Messori, his story is published for the first time in English.

As an infant, Mortara was on the point of death and secretly baptized by a Catholic servant employed by his family. He recovered his health, and in the Papal States where his family lived, the law required that he, like other baptized children, receive a Christian education. After several failed attempts to persuade his parents to enroll him in a local Catholic school, in 1858 Pope Pius IX had the boy taken from his family in Bologna and sent to a Catholic boarding school in Rome. There the child grew in Faith and eventually responded to the calling to become a Catholic priest.

The Mortara Case reverberated around the world. Journalists, politicians, and Jewish leaders tried to pressure Pius IX to reverse his decision. The pope's refusal to do so was used as one of the reasons to dissolve the Papal States in 1870. Currently the case is being used as an argument against the canonization of Pius IX, whom John Paul II beatified in 2000.

"In this account . . . Edgardo pours the soothing balm of love and truth over the turbulent waters of polemics, showing more eloquently than any argument could where the rights and wrongs of the case truly lie." —Roy Schoeman, from the Foreword; Author, Salvation Is from the Jews

"The Mortara Case is something few people know much about. It involves sacramental issues, the relation of Jews and Christians, kidnapping, and the last of the Papal States. Ignatius Press is well advised to bring this book originally published in Italian to our attention." —James V. Schall, S.J., Professor Emeritus, Georgetown University

"The Mortara Case has returned as an issue. This book explains the historical context and then lets Fr. Mortara himself speak through his memoirs. It is well worth reading."— Fr. Mitch Pacwa, S.J., Senior Fellow, St. Paul Center for Biblical Theology

"Ambiguities about the Mortara Case will remain, but the measured commentary of Vittorio Messori and the unprecedented publication of Fr. Mortara's own diaries put the whole emotional dilemma into a clearer light."—Fr. George Rutler, Pastor of St. Michael's Church, New York; Author, He Spoke to Us: Discerning God in Events and People