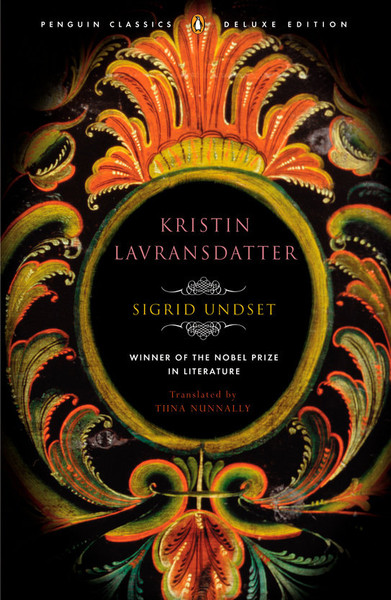 Includes all 3 books in this one volume - The Wreath; The Wife; The Cross.

Now in one volume, Tiina Nunnally's award-winning definitive translation brings this remarkable work to life with clarity and lyrical beauty.

As a young girl, Kristin is deeply devoted to her father, a kind and courageous man. But when as a student in a convent school she meets the charming and impetuous Erlend Nikulauss, she defies her parents in pursuit of her own desires. Her saga continues through her marriage to Erlend, their tumultuous life together raising seven sons as Erlend seeks to strengthen his political influence, and finally their estrangement as the world around them tumbles into uncertainty.

With its captivating heroine and emotional potency, Kristin Lavransdatter is the masterwork of Norway's most beloved author—one of the twentieth century's most prodigious and engaged literary minds—and, in Nunnally's exquisite translation, a story that continues to enthrall.

Includes an introduction by Brad Leithauser and features French flaps and deckle-edged paper.

"My favorite fictional hero or heroine is probably Sigrid Undset's strong-willed, sensual, self-destructive and ultimately rock-solid Kristin Lavransdatter. . . . Kristin's eponymous trilogy bears many rereadings. Right away one somehow identifies with this daughter of medieval Norway; soon one compassionates her in her sufferings. . . . For all her faults, she inspires love in many around her, including this reader. Her faith and loyalty make her quite beautiful to me."
—William T. Vollman, The New York Times Book Review

"We consider it the best book our judges have ever selected, and it has been better received by our subscribers than any other book."
—Book-of-the-Month Club

"The finest historical novel of the 20th century; indeed it dwarfs most of the fiction of any kind that Europe has produced in the last twenty years."
—Contemporary Movements in European Literature

"Sigrid Undset’s trilogy embodies more of life, seen understandingly and seriously . . . than any novel since Dostoevsky's Brothers Karamazov. It is also very probably the noblest work of fiction ever to have been inspired by the Catholic art of life."
—Commonweal

"No other novelist, past or present, has bodied forth the medieval world with such richness and fullness of indisputable genius. . . One of the finest minds in European literature."
—New York Herald Tribune

"A master . . . writing in a prose as vigorous, articulate and naturalistic as the novel it re-creates, Tiina Nunnally brilliantly captures a world both remote and strangely familiar."
—Judges’ citation, PEN/Book-of-the-Month Club Translation Prize