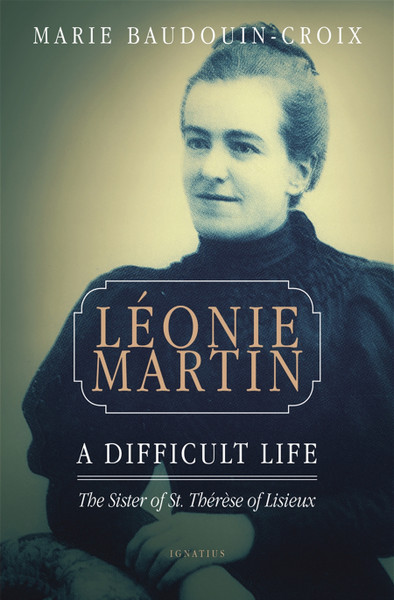 A sister of Saint Thérèse of Lisieux, Léonie Martin (1863-1941) was one of the five daughters of Zélie and Louis Martin, who were canonized by Pope Francis. She was the least gifted of the five Martin sisters, an emotionally disturbed child who suffered much and caused much anguish in her family.

Marie Baudouin-Croix has carefully researched Léonie's life, including her mother's voluminous correspondence about her family life. In letters to her daughters, sister, brother, and sister-in-law, Zélie confided the challenges she faced in raising L‚onie. Yet Léonie was the first one in the Martin family to understand and to follow Thérèse's Little Way.

After three valiant but unsuccessful attempts to enter consecrated religious life, Léonie was finally accepted by the Visitation Order in Caen. As a Visitation nun she succeeded in conquering a difficult temperament and other personal challenges, so that by the time of her death at seventy-eight years old she was regarded by many as a saint. Her convent at Caen has been inundated with letters testifying to her posthumous intercessory aid.

How did this troubled child turn into the nun remembered by many as so kind, serene, and happy that they could not believe she had such a difficult childhood? She discovered God within herself, in her weakness and suffering, and she became a great disciple of Thérèse's "way of confidence and love". Léonie practiced the Little Way so deeply that in 2015 the cause for her sainthood was officially opened by the Church.

"An essential read for anyone with a devotion to the Little Flower or with an interest in the science of the saints. It shows that problematic behavior in children can happen in any family, and that our imperfections can be very much a part of our journey to sanctity. A deeply moving book."
—Sally Read, Author, Night's Bright Darkness: A Modern Conversion Story

"For those seeking sanctity amidst life's struggles, Léonie Martin is a gift that helps us to apply the Little Way when the way we must travel is less than perfect. In Léonie's story we discover the truth that each of us, regardless of our station in life, is called to strive for sainthood."
— Lisa Hendey, Founder of CatholicMom.com

"It is reassuring to learn that even a family with three canonized saints was not without its painful human limitations. The woman once known as 'poor Léonie ' played her own essential role in the sanctification of the entire Martin Family."
— Fr. Sean Davidson, Author, Saint Mary Magdalene: Prophetess of Eucharistic Love

This Is Martin Bonner

In the Image of Saint Dominic (Digital)

A Family of Saints (Digital)

A Family of Saints