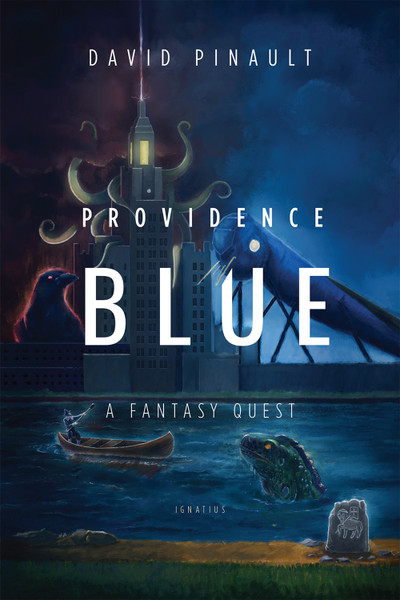 At his typewriter in little Cross Plains, Texas, Robert E. Howard created big characters—Bran Mak Morn, Solomon Kane, Conan the Barbarian—who shaped the art of fantasy fiction for generations. But Howard would never know it. On June 11, 1936, at the age of thirty, he shot himself outside his country home. Why would he do it, and where could death have taken him?

Providence Blue imagines the strange underworld journey of Howard after his suicide, through Texas  flatlands, ancient Egyptian ruins, and New England city gutters. Meanwhile, as his girlfriend Novalyne Price investigates what caused the tragedy, she is led to Providence, Rhode Island, home of the horror writer H. P. Lovecraft, where she makes a terrifying, life-changing discovery.

In Providence decades later, aging grad student Joseph Bonaventure struggles to finish his dissertation on Lovecraft. When he and a young librarian, Fay O'Connell, chance upon some of the author's lost papers, this breakthrough locks both of them in a web of black magic, occult conspiracy, and dark cosmic forces—and ties them intimately to the fate of Robert E. Howard. Alongside a cast of Providence characters, including a local priest and a stray Chihuahua, Joseph and Fay join a supernatural quest for good against evil, heaven against hell, the Lamb of God against the horrors of oblivion.

Written in a lean, direct style, with a native's sense of Rhode Island's geography and culture, David Pinault's Providence Blue pushes the fantasy novel into new terrain, bringing the Cthulhu Mythos of H. P. Lovecraft into contact with the startling reality of Christian doctrine.

"David Pinault's fantasy quest is indebted to Providence's hometown horror novelist H. P. Lovecraft, but it outdoes him in its cleverness, fast pace, multiple excitements, rollicking good nature, and overall sanity. This is entertainment at its finest."
— Ron Hansen, Author, The Assassination of Jesse James by the Coward Robert Ford and Mariette in Ecstasy

"Ancient evil tangles in the present day as Pinault weaves together the artistic legacies of Edgar Allan Poe and Robert E. Howard, pitting them against Lovecraft's Cthulhu Mythos, and drawing librarian detectives into the dark and perplexing mysteries hidden behind what seems to be everyday reality. Even as the novel battles against materialism and the practical scope of Lovecraftian prejudice, it engages with very personal questions of death and redemption. In its very strangeness, this book articulates hope."
— Eleanor Nicholson, Author, A Bloody Habit

"I am not sure how to classify what David Pinault has done here, but I like it. Is this fantasy? Historical fiction? Theology? Magical realism? The prose is terse, hard-boiled, and cynical—like its main character; but the story is full of darkly unpredictable characters and tragically comic turns of plot. It is at times both shocking and tender."
— J. Augustine Wetta, O.S.B., Author, The Eighth Arrow and Humility Rules

"How about we take some of the great creators of fantasy fiction and make them characters in a work of fantasy fiction, and naturally make it all intersect with historical events? That's exactly what David Pinault has done in this eye-squinting, goosebump-raising, brain-twisting page turner."
— Dale Ahlquist, President, Society of Gilbert Keith Chesterton