The Ear of the Heart

An Actress' Journey from Hollywood to Holy Vows 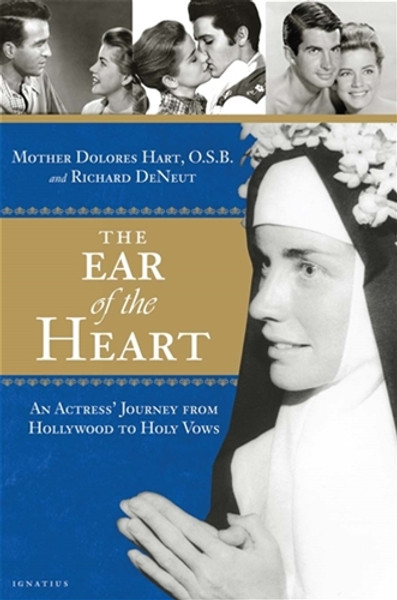 The Ear of the Heart

"Listen and attend with the ear of your heart." - Saint Benedict.

Dolores was a bright and beautiful college student when she made her film debut with Elvis Presley in Paramount's 1957 Loving You. She acted in nine more movies with other big stars such as Montgomery Clift, Anthony Quinn and Myrna Loy. She also gave a Tony-nominated performance in the Broadway play The Pleasure of His Company and appeared in television shows, including The Virginian and Playhouse 90. An important chapter in her life occurred while playing Saint Clare in the movie Francis of Assisi, which was filmed on location in Italy.

Born Dolores Hicks to a complicated and colorful Chicago family, Mother Dolores has travelled a charmed yet challenging road in her journey toward God, serenity and, yes, love. She entered the Abbey of Regina Laudis in Bethlehem, Connecticut, at the peak of her career, not in order to leave the glamorous world of acting she had dreamed of since childhood, but in order to answer a mysterious call she heard with the "ear of the heart". While contracted for another film and engaged to be married, she abandoned everything to become a bride of Christ.

"Mother Dolores Hart is a remarkable woman with a remarkable story-one of love, devotion and faith."
— Maria Shriver, bestselling author of Just Who Will You Be?

"The Ear of the Heart, like Dolores Hart herself, is Hollywood on the surface but tough and deeply spiritual on the inside."
— Norman Latov, MD, director of the Peripheral Neuropathy Clinical and Research Center at Weill Cornell Medical College, New York

"Mother Dolores Hart's life story is one of the most amazing I've ever read."
— Dan Goggin, creator of the Nunsense musicals

"The story of Dolores Hart teaches us to seek God regardless of where we are-in a summer storm, in prayer or even in front of a camera."
— Raymond Arroyo, New York Times bestselling author, host of The World Over Live, and EWTN news director

"Read now for some lively insights from the girl who kissed Elvis in the movies and became the Mother Prioress who gets the last laugh in real life."
— Paula Prentiss, actress

"This is a courageous adventure. It is a thriller."
— Richard Benjamin, actor and director

"The Ear of the Heart reminds us that God speaks most loudly when he whispers into our souls."
— Chris Davis, bird behavior specialist

"Read this fascinating story to learn how what seems like 'running away', is in reality 'running to' Love."
— Maria Cooper Janis, daughter of Gary Cooper

"This powerfully honest book is one of the most unusual and inspirational I have ever read. . . . This intelligent page turner by Mother Dolores makes you laugh, makes you cry and most of all, makes you think."
— Tab Hunter, actor

"From giving Elvis Presley his first screen kiss to finding the consolation of faith, Mother Dolores's story is poignant and deeply moving. They ought to make a movie of it!"
— Pia Lindström, television journalist, daughter of Ingrid Bergman

"The Ear of the Heart is a story of courage, sacrifice, dedication, and fulfillment. With grace and good humor in a voice as clear as the mountain spring, Mother Dolores Hart illuminates her lifelong quest for a state of tranquility and the joy of living in the presence of God."
— James Drury, actor in The Virginian

"Mother Dolores is an extraordinary woman and her journey from Hollywood movie star to Benedictine nun will touch the hearts of people all over the world."
— Jack Wohl and Dan Angel, film producers

Advent of the Heart

The Ear of the Heart (Digital)

The Ear of the Heart (Digital)

Heart of the Redeemer (Digital)

The Heart of Holiness

The Heart of Holiness (Digital)

The Heart of Virtue

Heart of the Redeemer

Advent of the Heart