The Vision of Freedom That Tolkien Got, and the West Forgot 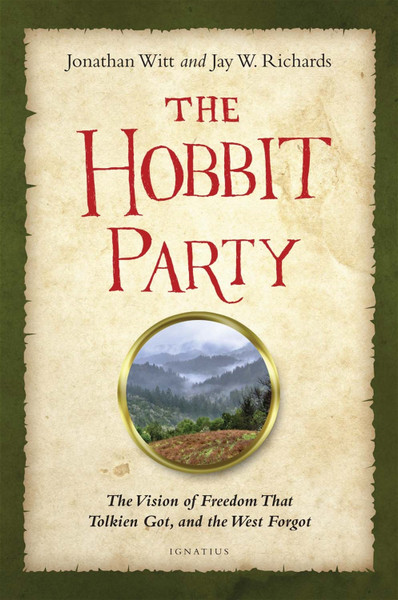 Anyone who has read The Hobbit and The Lord of the Rings can gather that their author hated tyranny, but few know that the novelist who once described himself as a hobbit “in all but size” was—even by hobbit standards—a zealous proponent of economic freedom and small government. There is a growing concern among many that the West is sliding into political, economic, and moral bankruptcy. In his beloved novels of Middle-Earth, J.R.R. Tolkien has drawn us a map to freedom.

Several books ably explore how Tolkien’s Catholic faith informed his fiction. None until now have centered on how his passion for liberty and limited government also shaped his work, or how this passion grew directly from his theological vision of man and creation. The Hobbit Party fills this void.

The few existing pieces that do focus on the subject are mostly written by scholars with little or no formal training in literary analysis, and even less training in political economy. Witt and Richards bring to The Hobbit Party a combined expertise in literary studies, political theory, economics, philosophy, and theology.

"The hobbits' Shire is a microcosm of Victorian England in every way, especially the way everything works fine without interference from the institutions of the state. But can the Shire really be a model for our more complex times? The Hobbit Party, with its punning title, makes the case that it can be, should be, was meant to be, and that The Lord of the Rings expands the argument to give us images of an ethical as well as ecological politics, ever more badly needed."
— Tom Shippey, Author, The Road to Middle-Earth

p>"As with the best works of the imagination, Middle-Earth invites one into a true reality, one immersed in timeless and universal truths. Witt and Richards brilliantly delve into the most profound depths of Tolkien's endlessly fascinating soul. A true conservative in the old sense, he recorded the stories of a world in chaos, but saved by the integrity of the person willing to surrender to grace. This work offers us a true feast: the feast of nobility, truth, goodness, and beauty."
— Bradley J. Birzer, Visiting Scholar in Conservative Thought, University of Colorado Boulder Author, American Cicero: The Life of Charles Carroll p>"Beautifully written, this work gives fascinating insights into the realm of Middle-Earth. Moreover, it is a tour of the important issues of our world through Tolkien's eyes, including limited government, man's temptation to power, freedom, just war, socialism, distributism, localism, love, and death. These topics are woven seamlessly throughout, and you will leave the book with unforgettable impressions of these themes illustrated by Tolkien's imagery."
— Art Lindsley, Vice President, The Institute for Faith, Work & Economics

"J. R. R. Tolkien is one of the most widely read but arguably misunderstood of the twentieth century's literary geniuses. In this book, Witt and Richards lift the veil on Tolkien and reveal a political and, yes, economic thinker who constantly surprises readers and whose insights are even more valuable for our time than his own. Tolkien fans who read this book will never think about this great author the same way again."
— Samuel Gregg, Research Director, Acton Institute Author, Becoming Europe

p>"This book is a 'drop everything and read it' book. Richards and Witt have opened up an often ignored aspect of Tolkien's work, namely the sense in which his myth bespeaks a political and economic order that stands in stark, even violent, contrast to the presiding power structures that dominate this unhappy globe. It should be made required reading in all courses in political philosophy. It's a glorious book."
— Thomas Howard, Author, Dove Descending: A Journey into T. S. Eliot's "Four Quartets" p>"Witt and Richards do a brilliant job of rescuing Tolkien's literary legacy from the clutches of the cultural left. They reveal Tolkien as a profoundly Catholic thinker, with deep insights into the fundamental issue of religion, namely man's attempt to grapple with his own mortality. As a conservative’s companion to Tolkien, The Hobbit Party renews our appreciation of Tolkien’s contribution to literature and his profound impact on our culture."
— David Goldman, Author, How Civilizations Die