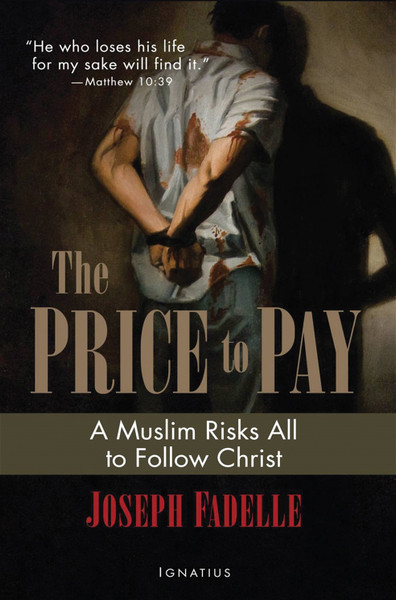 During his military service, Muhammad, a young Muslim Iraqi from a leading Shiite family, discovers to his dismay that his roommate is a Christian. Muhammad tries to convert his roommate, but he is the one who is converted.

In Islam changing one's religion is a crime, and Muhammad's family does everything possible to make him renounce his new faith in Christ. After threats and blows come prison and torture. Muhammad, who has become Joseph by his baptism, experiences a long Calvary but does not give in. Finally, he is taken from prison by relatives who threaten to kill him if he does not resubmit to Islam. They shoot him and leave him for dead.

The Price to Pay is the true story of Joseph Fadelle's conversion to Christianity. He risks everything-family, friends, his inheritance and home, and even his life-in order to follow Christ. In a dramatic and personal narrative style, Fadelle reveals the horrible persecution endured by Christians living in a violent and hostile Muslim world.

"It's tragic that there has never been a more appropriate time for a book such as this. Compelling, lyrical, captivating, and acutely necessary. Essential reading for every relativist out there, and for those who believe that Christians are not persecuted."
- Michael Coren, Canadian TV host , Author, Why Catholics Are Right

p>"An eloquent, riveting, and eye-opening account of one man's struggle to follow Christ in the face of seemingly insurmountable odds. Joseph Fadelle's intensely personal story contains powerful lessons about the growing threat to Christians from an increasingly aggressive Islam. His compelling narrative provides indispensable insight into the world behind a wall of coercion and oppression no less imprisoning than that erected by communists in the Cold War. The Price to Pay is at once captivating and illuminating."
- William Kilpatrick, Author, Christianity, Islam and Atheism

"Joseph Fadelle's autobiography is a spiritual meditation wrapped in a captivating thriller. For those of us who think of condescending tones and social rejection as religious persecution, Fadelle has given us a glimpse of what it truly means to abandon everything for the gospel. With its contrast between harsh religious bondage and "inebriating" freedom in Christ, The Price to Pay will transform your view of the Christian life."
- Jay W. Richards, Ph.D., Discovery Institute, Co-author, Indivisible: Restoring Faith, Family, and Freedom Before It's Too Late

p>"Headlines increasingly report of violence against Christians in villages and churches in the Middle East and around the world, and persecution of converts who refuse to recant even under threat of death. But seeing the face and hearing the voice of one steadfast convert humanizes the story and gives dignity to believers who are denied their humanity. Joseph Fadelle is that voice and his story is compelling. Christians have been asked throughout history and anew in our time ‘What price would you pay for your beliefs?' Fadelle's response is a stunning witness to the radical face and love of Christ."
- Sheila Liaugminas, Host, A Closer Look, Network News Director, Relevant Radio

The Price to Pay