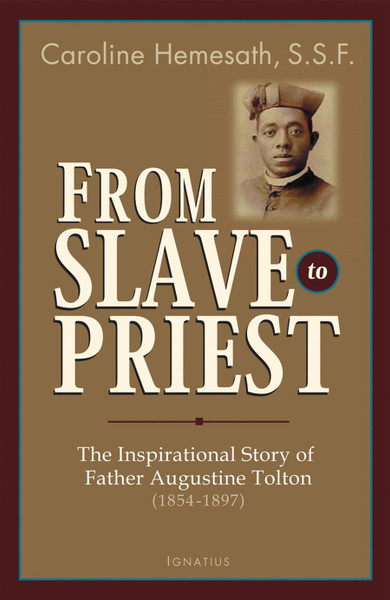 Fr. Augustine Tolton (1854-1897) was the first black priest in the United States. Born into a black Catholic slave family, Father Tolton conquered almost insurmountable odds to become a Catholic priest, and at his early death at 43, this pioneer black American priest left behind a shining legacy of holy service to God, the Church and his people.

With the thorough scholarly research and inspirational writing by Sister Caroline Hemesath, the great legacy of this first black priest, and his courage in the face of incredible prejudice within the Church and society, will be a source of strength and hope for modern Christians who face persecution for their faith, especially black Catholics who still experience similar prejudices. In American history, many black people have achieved, against great odds, success and made distinct contributions to our society and their fellowman. But Father Tolton faced a different source of prejudicean opposition from within the Church, the one institution he should have been able to rely on for compassion and support.

He endured many rebuffs, as a janitor spent long hours in the church chapel in prayer, and attended clandestine classes taught by friendly priests and nuns who saw in his eyes the bright spark of the love of God, devotion to the Church and a determination to serve his people. Denied theological training in America, these friends helped him to receive his priestly education, and ordination, in Rome. He later became the pastor of St. Monica's Church in Chicago and established a center at St. Monica's which was the focal point for the life of black Catholics in Chicago for 30 years.

The author interviewed many people who knew Father Tolton personally, including St. Katharine Drexel, and presents a deeply inspiring portrait of a great American Catholic.

Within this book are various illustrations and photographs.

"Few stories are as moving, and as exciting as that of Father Augustine Tolton, who rose from the chains of slavery to become the first recognized Black priest in the United States. The life of this holy hero has inspired me since my childhood, and having this opportunity to reacquaint myself with Father Tolton's virtuous life, has been a true blessing. Sister Caroline Hemesath's biography, first published three decades ago, makes a welcome reappearance this summer, from Ignatius Press. This is a life that for all its accomplishments on behalf of a specific minority, imitates closely the life of our Lord Himself, readily seen in the generosity, the long-suffering, and the never disturbed peace that marked the short, but so eventful years of Father Augustine Tolton. Everyone will be moved by his story, and I especially urge young Catholics to read the book, and learn from Father Tolton, just how much a life can mean, and how much God can accomplish through us, if we are willing."
— Wilton D. Gregory, Archbishop of Atlanta

"From Slave to Priest is an inspiring account of the first Black Priest in the United States. Augustine Tolton was born a slave and perservered against all odds to attain his goal to be a Catholic Priest. While the Civil War ended slavery, it only began the struggle for racial equality. Tolton's fervent vocational commitment was constantly challenged by prejudice, but he also experienced strong support. His brief priestly ministry was marred by prejudice, yet showed the power of God by the acceptance of both black and white faithful. Tolton's perseverance in his vocational commitment is an inspiring lesson for us all."
— Cardinal Justin Rigali, Archbishop of Philadelphia

p>"...Fr. Tolton is certainly an inspiring example of courage and determination in today's Church, for all of us called to respond to God's vocation to holiness, and especially those called to the priesthood and religious life. I am sure this book will contribute to making known his witness to unwavering fidelity to Christ: a legacy not only for the American Church, but also for all modern Christians, who face persecution for their faith..."
— Cardinal Ivan Dias Prefect, Congregation for the Evangelization of Peoples (Formerly Collegium Propaganda Fide, which educated Fr. Tolton)

The Passion from Within (Digital)