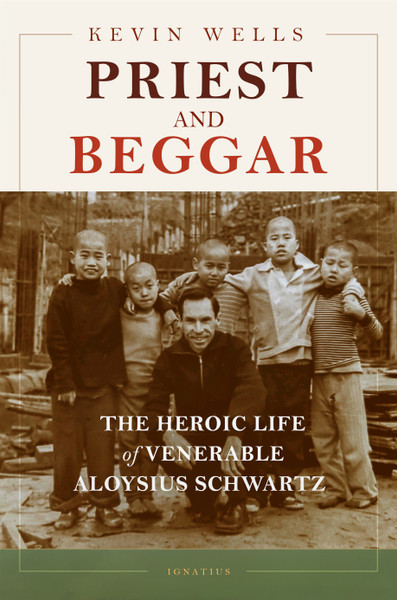 In 1957, at twenty-seven years old, Father Aloysius Schwartz of Washington, D.C., asked to be sent to one of the saddest places in the world: South Korea in the wake of the Korean War. Just a few months into his priesthood, he stepped off the train in Seoul into a dystopian film. Squatters with blank stares picked through hills of garbage. Paper-fleshed orphans lay on the streets like leftover war shrapnel. The scenes pierced him.

Within just fifteen years, Father Schwartz had changed the course of Korean history, founding and reforming orphanages, hospitals, hospices, clinics, schools, and the Sisters of Mary, a Korean religious order dedicated to the sickest of the sick and the poorest of the poor. All the while, he himself—like the Sisters—lived the same hard poverty as the people he served and loved.

Biographer Kevin Wells tells the story of a different kind of American hero, an ordinary priest who stared down corruption, slander, persecution, and death for the sake of God's poor. "What Father Al managed to do is beyond the pale", said his longtime collaborator Monsignor James Golasinski. "He was the boldest man I ever knew. He feared nothing."

Known for his joy and his humor, even in the teeth of Lou Gehrig’s disease, Schwartz was declared a Servant of God by Pope Francis in 2015. By the time of his death in 1992, his work with the Sisters of Mary had spread to the Philippines and Mexico; and since then, the Sisters have founded Boystowns and Girlstowns across Central and South America, as well as in Tanzania. Father Schwartz died calling out to his beloved Mary, the Virgin of the Poor, saying, "All praise, honor, and glory for anything good accomplished in my life goes to her and to her alone."

“A remarkable account of what our Church and world so desperately need at this time: a humble priest whose unwavering commitment to Christ in service to the poor models for us radical discipleship.”
—Most Reverend Thomas Daly, Bishop of Spokane, WA

“Can anything good come out of Washington, D.C.?  Oh yes, quite possibly a future saint! A truly riveting story that makes one want to be a better servant of Christ and others.”
—Father Donald Calloway, M.I.C., Author, Consecration to St. Joseph

“Destined to become a spiritual classic, this book is a rare find, a life-changing page-turner. The sacrificial life of this priest floods light into our present darkness. I highly recommend this soul-stirring book.”
—Kathleen Beckman, Author, A Family Guide to Spiritual Warfare and Praying for Priests

“Father Al Schwartz will both inspire you and challenge you with his uncompromising love for the poor and his pure, almost raw, faith. It is a compelling read. And it will not leave you unchanged.”
—Father Carter Griffin, Rector, Saint John Paul II Seminary, Washington, D.C.

“Father Al’s gift of the light of Christ in the very dark place of South Korea in the late 1950s is a little-known episode that Wells masterfully spotlights. May this wonderful story bring light to all who face darkness in our time.”
—Most Reverend Joseph Strickland, Bishop of Tyler, TX

“Father Al was a combination of Saint Francis of Assisi in his embrace of real poverty and Saint Damien the Leper in his service to the poorest of the poor in postwar South Korea with amazing success.”
—Father Thomas Morrow, Author, Who’s Who in Heaven

“Father Al’s achievements show how unshakeable faith, profound love, and dedicated prayer can save the lives of horrifically abused and abandoned children, and how teaching the trades and forming them as apostles can make an impact on the faith of whole nations.”
—Janet Smith, Ph.D., Author, Self-Gift; Editor, Why Humanae Vitae Was Right

“One comes away from this book disturbed and enthralled by the incredible suffering and miraculous triumphs of Father Al and of those to whom he incarnationally united himself in imitation of the Poor Man of Nazareth.”
—Professor Joseph Atkinson, John Paul II Institute for Studies on Marriage and Family

“Father Al’s story will inspire all who read it to live a saintly life. Beautiful.”
—Father John Hollowell, Archdiocese of Indianapolis

"You cannot read the Gospels in the same way after reading this biography on the startlingly bold and holy life of Venerable Aloysius Schwartz. A thriller that will burst into readers’ souls.”
—Father Jonathan Meyer, All Saints Parish, Guilford, IN