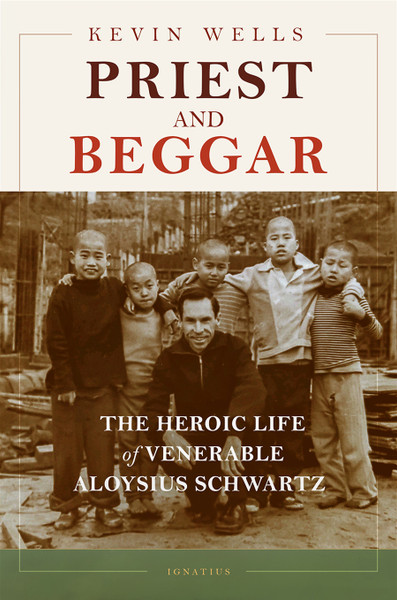 In 1957, at twenty-seven years old, Father Aloysius Schwartz of Washington, D.C., asked to be sent to one of the saddest places in the world: South Korea in the wake of the Korean War. Just a few months into his priesthood, he stepped off the train in Seoul into a dystopian film. Squatters with blank stares picked through hills of garbage. Paper-fleshed orphans lay on the streets like leftover war shrapnel. The scenes pierced him.

Within just fifteen years, Father Schwartz had changed the course of Korean history, founding and reforming orphanages, hospitals, hospices, clinics, schools, and the Sisters of Mary, a Korean religious order dedicated to the sickest of the sick and the poorest of the poor. All the while, he himself—like the Sisters—lived the same hard poverty as the people he served and loved.

Biographer Kevin Wells tells the story of a different kind of American hero, an ordinary priest who stared down corruption, slander, persecution, and death for the sake of God's poor. "What Father Al managed to do is beyond the pale", said his longtime collaborator Monsignor James Golasinski. "He was the boldest man I ever knew. He feared nothing."

Known for his joy and his humor, even in the teeth of Lou Gehrig’s disease, Schwartz was declared a Servant of God by Pope Francis in 2015. By the time of his death in 1992, his work with the Sisters of Mary had spread to the Philippines and Mexico; and since then, the Sisters have founded Boystowns and Girlstowns across Central and South America, as well as in Tanzania. Father Schwartz died calling out to his beloved Mary, the Virgin of the Poor, saying, "All praise, honor, and glory for anything good accomplished in my life goes to her and to her alone."

"I have never read a more beautiful and touching book - a book about a joyous life and overpowering death, and grief and joy.  Michael and Ruth Pakaluk's account of love and grief towers head and shoulders above the justly acclaimed accounts of C.S. Lewis in A Grief Observed and Sheldon van Auken in A Severe Mercy. Throughout, I felt in my heart that Ruth is a marvelous saint for our times."
- Michael Novak, Philosopher, Author, and Diplomat

p>"In this book you will meet a truly wonderful person. There are few things in life more precious than that. I invite you to meet a warrior for life whose pen is truly mightier than death's sword."
- Peter Kreeft, Author, Because God is Real

"People frequently commented on Ruth's selfless character, boundless optimism, and fervent faith. Her zest for life and zeal for faith were gifts from God - gifts offered to us all.  I pray that these pages will inspire you to be ever more open to God's grace and mercy."
- Most Reverend Daniel Reilly, Bishop Emeritus of Worcester, Mass.

p>"The title of this book, based on the well known quote, really says it all - while God is the same yesterday, today, and forever, He is also full of beautiful and incredible jaw dropping surprises, especially where His love and mercy are concerned.  This book reminds us that no one is ever out of God's reach.  Even when we, in our very limited capacity may think all is lost, along comes the Lord and all things are made new."
- Teresa Tomeo, Syndicated Catholic Talk Show Host