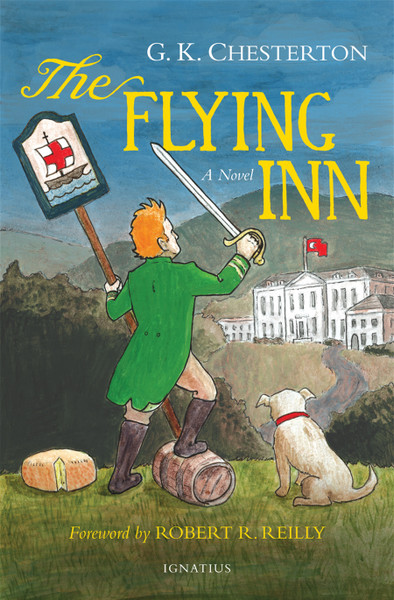 The beloved G.K. Chesterton presents a well-crafted and joyous work of political fantasy about a small group of rebels who rail against the government’s attempt to impose prohibition in England.

Humphrey Pump, a pub owner, accompanied by Captain Patrick Dalroy, a flamboyant giant with a tendency to burst into song, take to the road in a donkey cart with a cask of good rum, a large block of cheese, and the signpost from his pub, The Flying Inn. The two men bring good cheer to an increasingly restless populace as they attempt to evade the law. In a journey that becomes a rollicking madcap adventure, the two travel round England, encountering revolution, romance, and a cast of memorable characters.

The Flying Inn is the most rambunctious of Chesterton's novels, a rollicking ramble through the heart of merry England, in which our intrepid heroes stay one step ahead of the enemies of civilization."
— Joseph Pearce, Author, Wisdom and Innocence: A Life of G.K. Chesterton

"Chesterton said The Flying Inn was one of the books he most enjoyed writing, and indeed it is a joyous romp of mirth and mayhem. But it has turned out to be shockingly prophetic as it portrays the modern world turning its back on Christian civilization, giving way to a blur of barbarism, bureaucracy, and Islam. The rich irony is that a story filled with drinking songs and a barrel of rum should be so sobering."
— Dale Ahlquist, Author, G.K Chesterton: The Apostle of Common Sense

"Chesterton uses the fantastical to reveal the real, and never has he done so in as prescient a way as in The Flying Inn. In fact, there is nothing too absurd in this satirical work for it not to have actually taken place recently. . . . It can be enjoyed simply at the level of a rip-roaring good yarn with some sidesplitting laughter. At a deeper level, he lays bare the corrupt mindset that subverts Western civilization in favor of a future beyond. So grab a cask of rum and draw your sword."
— Robert Reilly, from the Foreword

"When I was young I thought reading books for pleasure was not possible. Then I happened upon Chesterton's The Flying Inn. I could not put the book down, and as soon as I had finished, I turned to page one and began again. Humphry and Patrick and their madcap adventures made a reader out of me, and I've been grateful to them and to G.K. Chesterton ever since."
— John Peterson, Editor, Father Brown and the Ten Commandments